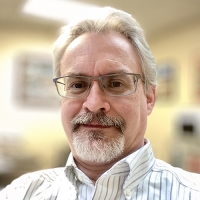 Ralph S. Bingham III, began his tenure as Executive Director of LibraryLinkNJ in July 2021 after serving as Director of the Gloucester County Library System. Before being appointed to Director of GCLS in 2018, Ralph was Head of Reference & Digital Services, and was project manager for the MakerStudio @ GCLS--the first public library makerspace in Gloucester County, NJ, and the GCLS InnovationStudio on the Gloucester campus of Rowan College of South Jersey. Ralph has spent much of his professional life working with technology in public libraries with a brief stop as Director of Information Technology at the New Jersey State Library.

Ralph most recently served as Chair of TOPCATS: Taskforce On Post COVID-19 Alignment, Trends and Strategies in New Jersey Libraries and Secretary of the LibraryLinkNJ Executive Board. Over the past decade, Ralph has served on numerous statewide task forces and advisory groups including the LLNJ Delivery Task Force, MentorNJ Task Force, NJSL LSTA Advisory Council, NJSL Database Advisory Committee, NJSL Statewide Services Task Force, the New Jersey Makers Day Board, and various NJLA Sections and Committees. Ralph received his BA from the University of Delaware and his MLS from Rutgers University. When he's not working, he enjoys reading, traveling, and nature photography.

Mi-Sun began work at the cooperative as Program & Services Coordinator and Webmaster in July 2005 and changed her job responsibility to IT/Online Project Manager & Program Coordinator in 2011. Beginning Fall 2020, Mi-Sun now serves as IT Project Manager. Mi-Sun has designed and implemented the cooperative website in Drupal (open source content management platform) and is continuously working on updating and improving the cooperative’s online service. Previously as Program & Services Coordinator at the cooperative, Mi-Sun coordinated hundreds of continuing education workshops and programs on a variety of subjects. In collaboration with Technology and Diversity Committees of the cooperative, Mi-Sun also successfully managed the cooperative’s projects and services including the Statewide Diversity Initiative Workshop Series, Website Development Projects for member libraries, Gaming in Libraries Service, Tech is IT Conferences, Senior Spaces Project & Conference, GLBTI Conference, and many more. Prior to LLNJ, she worked at the Ocean County Library System as Web Coordinator/Senior Librarian and designed implemented the library’s website. Mi-Sun is a certified Project Management Professional (PMP) and a secret agent of MWA (Matchmaking World Association). 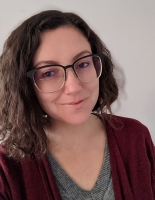 Darby Malvey joined LibraryLinkNJ after ten years of work in New Jersey libraries; first as a Youth Services librarian in public libraries and most recently as a School Library Media Specialist for 6th-12th grade students. She has been especially passionate about her work addressing issues of news and media literacy, serving as a member of her school district's Equity Council, and working to get great books into the hands of young readers. At the state level, Darby has participated in a variety of advocacy efforts to raise awareness of the value of Certified School Library Media Specialists in New Jersey's schools, and has worked hard to build bridges between school and public library professionals. Darby has participated in a number of statewide library initiatives, including serving as a member of the NJLA Executive Board, co-chairing the NJASL affiliate group TriCSL, and working as part of the NJASL/NJLA Joint Task Force on School Libraries.

Darby received her BA from the University of Delaware and both her MLIS and School Library Media Certificate from Rutgers University. When she's not working or chasing after her two young kids, she loves to read YA novels, travel to new places, and start craft projects she has no intention of finishing. 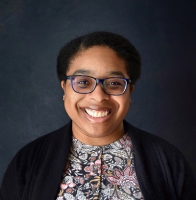 Stephanie Sendaula joined LibraryLinkNJ in 2022. She was previously an editor at Library Journal, and also worked as a reference librarian at public libraries in NJ. As a librarian and writer, she is especially passionate about the intersection of social justice and LIS, and has coordinated webinars and continuing education workshops on best practices in making the library a more equitable and inclusive space. She received her M.L.I.S. from Drexel University and her B.A. from Temple University. When she’s not working, she enjoys baking, cooking, and gardening—and will always have a cookbook recommendation to share. 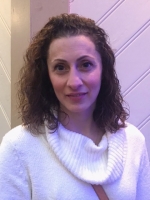 Jennifer Bruno joined LibraryLinkNJ as the Administrative Operations Manager after working over ten years in the medical field. Jennifer graduated from Pace University in 2005 with her bachelors in Public Accounting and Auditing. While completing her bachelors degree Jennifer was given the opportunity to start working full-time for Merrill Lynch as a billing system Auditor which she did for 6 years. Jennifer decided it was time for a change and moved to the business side of healthcare. At that time she worked for Staten Island University Hospital’s Case Management Department. She reviewed the Quality Assurance and Audited the entire social work department. While networking she was approached by a start up social services company which geared their services toward homebound and geriatric population. They knew Jennifer would bring her strong leadership qualities and help with building a diverse well trained staff. During her four years Jennifer held the Intake Manager position and helped the agency grow from 250 patients to over 1000 patients across NYC. She was very passionate about the agency’s mission, which helped form referral bonds with hospitals and private medical offices.

In 2018 Jennifer welcomed her second child and was living in New Jersey with her family. At this time she wanted be closer to home and and decided to pursue a different path in the medical field. Jennifer joined an Outpatient mental health agency as an Administrative Assistant and rapidly grown within the agency and became the Facility Director 2020.

When not working, Jennifer is busy supporting her two boys with hockey and Jiu Jitsu. She also loves traveling and gardening with her husband. 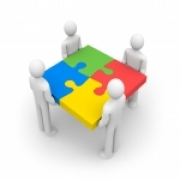 Carol Fishwick is the Member Services Coordinator for LibraryLinkNJ. She previously held the same position at INFOLINK for 11 years. For 17 years prior to her tenure at the cooperative, she served as a Legislative Aide for State Senator Robert Smith. After attending Monmouth University, Carol began her career at Revlon, Inc. in Edison.